The number of 457 visa applications that require employers to advertise the jobs to Australian workers first could slump to just 25 per cent because of Australia’s free trade agreements (FTA).

In the nine months to May this year, 38,134 primary 457 visas were granted to overseas workers with only around one third of those (12,084) requiring the employer to test the local labour market first to ensure there was no Australian who could do the job.

New ACTU analysis based on these Department of Immigration figures shows 2,416 fewer jobs would have been offered to Australian workers during the same period under the new China FTA and a future India FTA

This would mean labour market testing would only cover one-in-four 457 visa nominations.

It’s outrageous that at the same time a Senate inquiry into temporary work visas in Perth today will hear evidence of abuse of the temporary visa system, the Abbott Government is making it easier for companies to hire workers from overseas without advertising those jobs to Australian workers.

Under new Investment Facilitation Agreements in the China FTA, companies with projects worth more than $150 million will also be able to negotiate to bring in lower-skilled workers at wage rates that fall below the current wage floor for the standard 457 visa program of $53 990 per annum.

Unions fear the same will happen if the India FTA is signed later this year.

When the Government announced the conclusion of negotiations for the China FTA, it tried to argue that labour market testing would still apply to workers from China but the recent release of the text of the agreement clearly shows this will not be the case.

Once again when it comes to the needs of workers, the Abbott Government has blinkers on with the interests of big business solely in its sights.

“Australia’s temporary visa system is reaching crisis point and instead of fixing the abuse and exploitation, the Abbott Government is making it easier for companies to bring in temporary workers at the expense of local jobs.

“Free trade agreements must support local jobs and industry and the deal with China does not do that.”

“WA’s economy is highly dependent on the resources sector and over the past three years unemployment has been rising.”

“It is also important that temporary overseas labour in Australia are not exploited through poor wages, poor safety or, in some cases, slave-like conditions.”

“A few years ago following some serious rail accidents, we uncovered that the Public Transport Authority (PTA) had employees working on overhead lines and signalling equipment who do not have the recognised Australian National Standard qualification.

“Later we found that the PTA had employed Australian trainees for this skilled work, but they were on temporary contracts of a shorter duration than the period needed to fully qualify.

“Now the PTA is employing temporary overseas labour, many of whom need to do lengthy training to be recognised for work in Australia.

“It just shows that even our own government is going to great lengths to avoiding training and employing young Australians but instead giving the work to temporary visa holders.

“Sadly, in the construction industry, we have seen the gross exploitation of temporary workers, many on backpacking visas, with companies underpaying them and getting away with it. We have seen workers ripped off and too scared to speak out for fear that they will be deported. This is happening at the same time as youth unemployment is at its highest in two decades. This is an absolute disgrace.

“The construction industry is a high risk industry and we also see temporary workers dangerously performing work without the qualifications or the skills to get the job done safely.

“The temporary visa system cannot continue as it is, we need a system that deals with skills shortages, not a system that encourages employers to hire cheaper and more vulnerable workers so they can make a quick buck. Employers must also invest in skills and training, so that our young people can get a start in life.

“Abbott’s China Free Trade Agreement will make the situation worse with Chinese companies being able to bring in their own workers on major projects, without advertising locally and some even exempt from skills tests. The Government has in effect ceded control over skilled migration policy to a foreign country with everything including pay rates up for grabs. 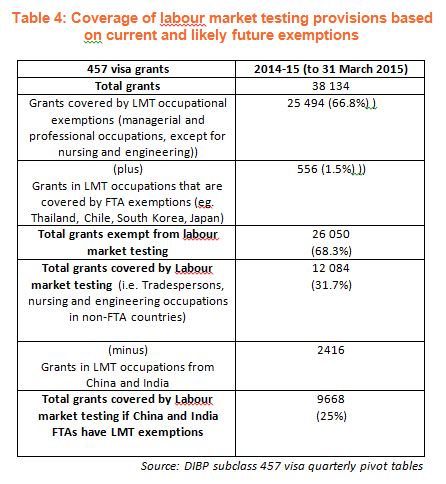