UnionsWA has commented on the release by the ACTU of a McKell Institute report “Counting the Cost: The Impact of Sunday Penalty Rate Reductions on Urban Australia (June,2017)”.  The full report is available online here.

“In the twelve federal electorates that cover the Perth metropolitan areas the report estimates that the total loss of take-home income from the Sunday penalty rates cut will be $79.2 million a year.

“Working West Australians, estimated across Perth to number 36,686, that will be affected by this Sunday pay cut work in retail, pharmacy and hospitality jobs and are already low-paid employment.

“Their jobs are particularly vulnerable to economic hardship – hardship that a cut in penalty rates will worsen.

"Of course, those in low-paid employment by necessity spend all or almost all of their income in order to get by.

“So, when the low-paid are paid even less, there is a very real hit taken by our local economy – an economy that is already doing it tough.

“This federal decision will begin to impact working people and our economy from 1 July this year.

“The Turnbull Liberal-National Government have made it clear that they will do nothing to protect the pay of those that rely on weekend penalty rates.

“Penalty rates cuts will do very real harm to working people in our regions and further weaken local economies.” 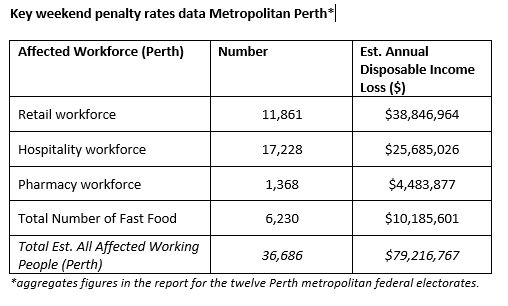