“WA is the only state or territory in Australia where the work fatality rate actually worsened in 2015 compared with 2014.

“Just as worrying is that the long-term trend for work fatalities in WA is not improving.

“In 2015 the work fatality rate in WA was found to be exactly the same at this thirteen-year average, at 2.6.

“Any fatality, at work or otherwise, is a tragic loss for family, friends, co-workers and communities.

“Sadly, this data does suggest that those reports are indeed more frequent than they have been in the past.

“The West Australian economy relies on industries that are inherently dangerous – construction, mining, transportation and agriculture being among these.

“Everyone – working people, unions, employers and governments - have a role in preventing work fatalities.

“However, the Barnett Government has lags behind others States.

"There have been funding cuts to WorkSafe, including a cut in funds for WorkSafe Inspectors.

"WA has among the weakest penalties for workplaces that break work health and safety laws.

“Law reforms needed to address WA poor record have been tied up in endless consultation without decisions by government.”

“There is an urgent need to ensure that the WA Government does more to prevent work fatalities.” 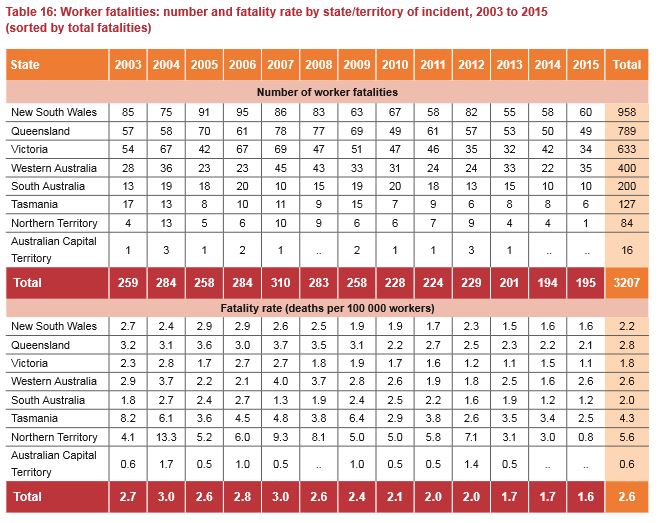