While in Perth today Dave Oliver, Secretary of the ACTU joined UnionsWA and the Transport Workers Union of WA to call on WA and Australian Governments to do more in response to recent statistics pointing to an increase in road fatalities and serious injuries among truckies in WA.

“Truckies have one of the most dangerous jobs in the Australia, so it is unacceptable that in WA the trends are getting worse, not better.

“Every worker should have the right to return home unharmed at the end of their working day.

“Every family should know that their loved ones are safe at work.

“The fact that the rate of serious injury among truckies in WA has recently increased and is higher now than at any time in the past nine years is a concern for truck drivers and all road users.

“The Barnett and Abbott Governments need to consider what they can do to put WA back in line with the rest of Australia, where the fatality and serious injury rates for road freight workers and across all industries have been improving slightly.

”The ACTU supports the call by UnionsWA including the Transport Workers’ Union to invest in improving WA’s roads.”

“Death and serious injury on the road is a horrible tragedy for truckies and their families as well as a danger for the travelling public.

“This latest report from Safe Work Australia records that in 2010-11 there were six fatalities in WA, fully one in five of all fatalities nationally.

“The rate of fatalities in the road freight industry is ten time the national average for all industries.

“In the last days of the recent federal election, Tony Abbott ripped almost half a billion dollar of funding away from urgently needed improvements to the Great Northern and North West Coastal Highways. These should be the life-blood of our economy, but they’re the highways of death in WA. 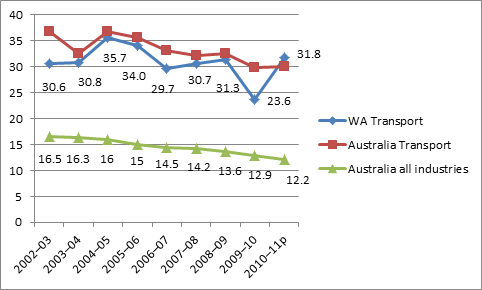 “For those affected workers and other road users, work death and serious injury are horrific.  Life and livelihood are lost.

“Of course this also has an impact on costs to business through worker’s compensation insurance and the loss of productive workers.

“WA has an appalling record of trying to hide work related road fatalities and injuries, with WA’s Work Safe refusing to count many road deaths and injuries.

‘Work Health and Safety in the Road Freight Transportation Industry’ (Safe Work Australia, October, 2013).  Table 3, page 13 the source for figures used in the chart above. P 7 for fatalities.

‘State of the Work Environment: Work-related fatalities, WA, 2006-2007 to 2012-2012 (Transportation, Postal and Warehousing Industry figures quoted above are from page 36)