UnionsWA has today released research it has undertaken with Professor Alison Preston that analyses Australian Bureau of Statistics data on duration of job search across regions within WA recently released and over the past decade. Today around 22,000 West Australians have been searching for work for more than a year. The research shows that the duration of job search has risen sharply in WA, but significantly so in Perth North West, Perth North East, Perth South East, Mandurah and the Wheatbelt regions of WA. UnionsWA has called for more to be done to support unemployed job seekers, including increasing the Newstart Allowance and a greater effort by Federal and State governments to grow local jobs. 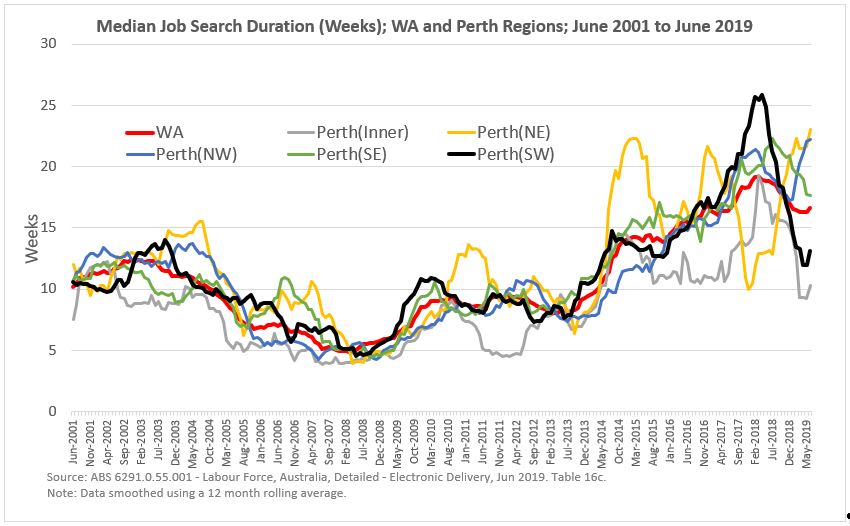 “These job seekers, their families and our community are doing it tough.

“In the decade since the Global Financial Crisis trends for job search in WA have worsened with median or typical durations now extending to between four and five months in hard-pressed areas of the Perth North West, Perth North East, Perth South East, Mandurah and the Wheatbelt.

“This means that half of job seekers are searching for longer than four or five months, some for much longer.

“Responding to growing calls for increasing the rate of Newstart Allowance, the Federal Government has claimed that the low level of payment is justified because job seekers are likely to be on the payment only temporarily while they are between jobs.

“That excuse from the Federal Government is simply not good enough in the face of this evidence.

“More needs to be done to create local jobs.

“Those who are unemployed by necessity spend all their income locally in order to just survive.

“Raising Newstart Allowance will therefore both raise these people out of poverty and give our local economy a much-needed economic boost through increased spending.

“Recently the Reserve Bank of Australia noted the low rates of wage growth and in particular the impact of the capping at low levels of public sector workforce wage rises, is a factor in our struggling economy and jobs market.

“The large and growing pool of those who are long term unemployed is putting pressure on our public services and our public sector workforce.

“The case for fairer and greater pay increases beyond the WA State Wages Policy is clear and the economic case for doing so is getting stronger.

“Improving access to job skills training, buying locally made goods and services and limiting the exploitation of temporary overseas labour are also among the measures needed to strengthen our local economy and jobs market.

“My analysis, undertaken at the request of UnionsWA, takes a deliberately long term and cautious approach to the ABS data.

“ABS data can vary from month to month and when looking at regions of WA with relatively small populations differences can fluctuate substantially.

“For example, the most recent ABS raw data for June 2019 suggests a large increase in duration of job search in many regions of WA.

“By using an annual average for duration of job search monthly increases are passed over in preference to trends over a past yearly average to each month.

“Similarly, the use by the ABS and this work of median rather than average duration of job search tends to highlight a lower figure because, in practice, there are comparatively small numbers of very long-term job seekers and if an average figure were used instead of a median, then it would be much higher.

“I have been on Newstart Allowance for six years, including periods when I have been incapacitated for work, mostly as a result of depression.

“Newstart Allowance is barely enough to survive on, it’s not enough to live on.

“When, for several years, I was well enough to search for or take on work I suspect, because of my age – I am now 65 years old – I had no job interviews despite applying for many, many jobs, being skilled and experienced.

“We need to both create more jobs and work to address discrimination in employment in all its forms.”

This is part of Jim's story:

The paper by Professor Preston can be viewed and downloaded online here.