“Over a quarter of a million working West Australians are now in work where they have no leave entitlements.

“In addition, many are in jobs that are insecure or casual, and have low wages.

“It’s almost impossible to plan for the future for themselves and their families.

“Often women are forced to accept insecure employment as it is the only way they can also balance their unpaid caring responsibilities.

“The ABS has found the typical or median wages paid for women in work without leave entitlements was $463 per week in August 2017 compared with $624 per week for men in WA.

"Low pay and rapidly declining pay is a crisis for many. Over the same three-year period in WA, the typical pay of women working in jobs without paid leave has increased slightly by $23.70 per week.

“These weekly income figures are not adjusted for inflation, so as costs of living have risen the real value of wages – particularly for men -  has been even further eroded.

"Low pay and rapidly declining pay is a crisis for many.

“The total number of working people in jobs without any leave entitlements has continued to rise over the past three years.

“Addressing insecure work, low incomes for women and falling incomes for men needs to be a priority for our federal and WA governments.

“Federal and State Governments can act to make our workplace laws fairer and strengthen the rights of working West Australians.” 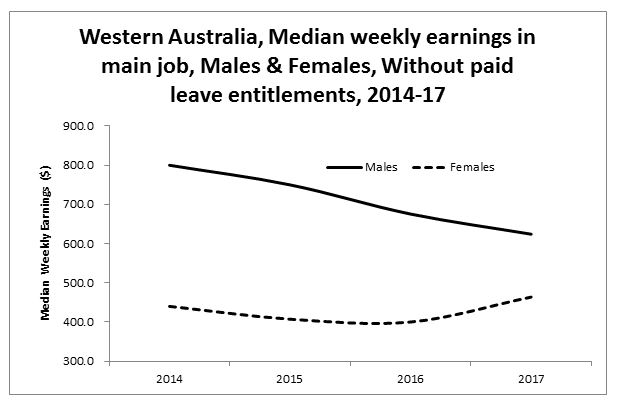