Sadly, Tony Cooke, former Secretary of UnionsWA passed away overnight, during the evening of Wednesday 24 April 2018 following a long illness. 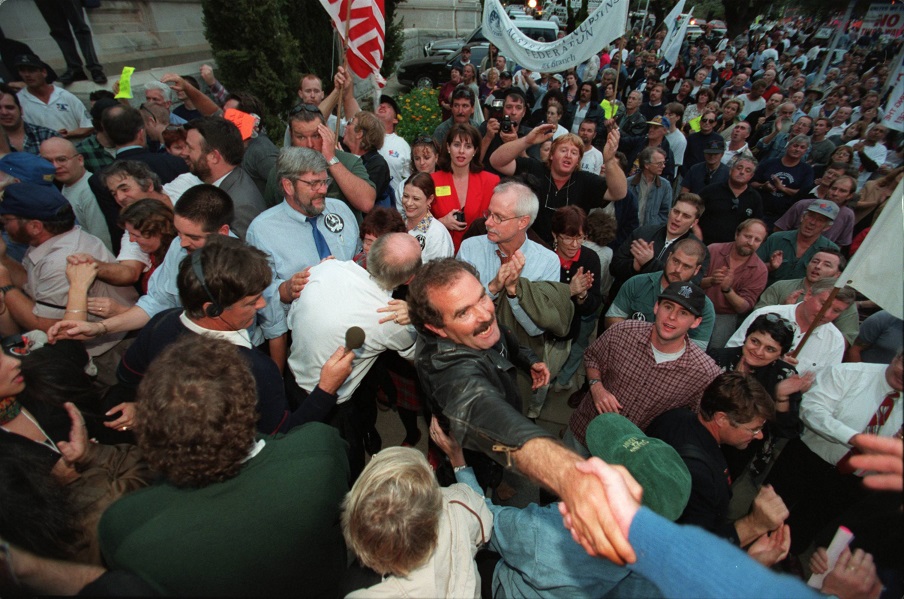 Photo reproduced courtesy of Westpix, depicts the welcome Tony Cooke received upon leaving the WA Parliament after an all-night protest over the Third Wave of industrial law changes.

Tony Cooke worked at the forefront of unionism in WA for 25 years until he stood down as UnionsWA Secretary in 2001. His activism never ceased.

On behalf of working people and unionists, we extend our condolences to his wife, daughters and many family and friends.

Tony is perhaps best remembered and admired for his innovative leadership during in the three ‘waves’ of Industrial Relations legislation in WA throughout the 1990’s, which culminated in the final, third wave campaign in 1997.

His leadership was highly effective in engaging wider community support, which engaged the support of families, church groups, celebrities and activists. He made the union struggle their struggle.

His tactics were different and innovative for the time – everything was employed to allow many groups to display their voice - picnics, BBQs, street theatre, road blocking the Kwinana Freeway with a three-lane abreast ‘go slow’ which had traffic backing up for miles.

The third wave culminated in one of the largest union rally of recent times on the 29th April 1997 when an estimated 35,000 people marched from the city to Parliament house to protest the laws.

This short video summarises the history of the the Third Wave dispute that Tony led.

The second wave campaign was attacked heavily in the media. Tony Cooke was invited to a face-to-face meeting with Kierath and Court, which he was happy to attend. Cooke then informed Court that he had been in contact with members from the South African Maritime Union and they would refuse port entry to a ship full of Western Australian bauxite thus causing an international incident.

This was the first time union in WA had worked with members in another country as a tactic against the proposed legislation. With the Federal Opposition looking to win the election in 1996 it advised their State counterparts to withdraw the unpopular legislation due to the possibility of jeopardising its chances at the federal election. The second wave was defeated outright.

Tony established and staffed the first workers' compensation department in the Trades and Labour Council of WA (TLCWA), as UnionsWA was then know. Tony initiated the change of name for the TLC, which has since been copied interstate. That among a number of moderising reforms to the organisation.

His social work studies gave him a broad perspective on the rights of people as well as work rights. He was central to the establishment of the Welfare Rights and Advocacy Service and was its Board Chair for many years. He also served as Chair of the TLCWA Building Society for many years. Tony led the union occupational health and safety agenda and served on the WA OSH Commission. He also led diversity and affirmative action initiatives inside TLCWA and movement in general and strongly campaigned for indigenous rights.

A great believer in educating and creating further opportunities within both the Labor and union movement, Tony Cooke was instrumental in bringing the Organising Works traineeship to WA and he also chaired the Labour Movement Education Association.

Tony's record at the TLCWA/Unions WA can be in part characterised by a strong development of a union movement with broader reference to member’ lives.

He always looked at the broad needs of union members in society - not just at work - and always looked to the future and the changes needed to stay relevant to members.

He will be remembered as one of the most influential union leaders in West Australian history.