Poll: Big swing against Government, result “too close to call”

UnionsWA has today released results of a poll, commissioned on behalf of the Save Our Services campaign, of six key marginal electorates in WA which points to a large swing against the government. The poll canvassed key issues of concern to voters, issues that will be key to deciding the election.

Conducted by respected pollsters, WA Opinion Polls, and commissioned by UnionsWA for the Save Our Services campaign, the poll surveyed a sample 2,700 of West Australians across six key marginal Perth metropolitan electorates.  This included both 2,100 robbo-survey completions and 610 in-person completions involving longer survey.

Across these electorates it points estimates a swing away from the government of around 9% and a line-ball 51% to Labor and 49% to the Liberals. For the first time the new electorate of Bicton has been polled with a 50/50 result.  Other seats polled include Mouth Lawley, Morley, Wanneroo, Southern River and Swan Hills.

“There’s a large swing on in key marginal seats, but at this stage election is too close to call.

“Unprompted the top issues for these West Australians are health and hospitals, public transport and jobs.

“Underlying these top-of-mind issues for key voters is the record of mismanagement and poor decisions from the Barnett Government.

“Privatisation and cut backs to health, education and other services are short-sighted because they end up costing more in the long run.

“The decision to slash Education Assistants in our schools, leaving teachers to alone in our classrooms is a classic example of shortsightedness.

“As unemployment and under-employment rise, many West Australians struggle with rising costs of living and increasingly rely on publicly provided services in our schools and hospitals.

“The record on hospital privatization has become a tragic tale of one management stuff-up after another.

“The promise to privatise Western Power is a promise to increase electricity bills.

“When our public assets and services are sold, they are gone forever.

“The recent business-funded poll was commissioned and leaked to cause maximum damage to the Premier’s personal political future.

“This poll is about the issues that West Australians are concerned about in the lead up to what looks set to be a close electoral contest for government.

“That electoral contest should be about ideas and values for a more secure future for all West Australians.” 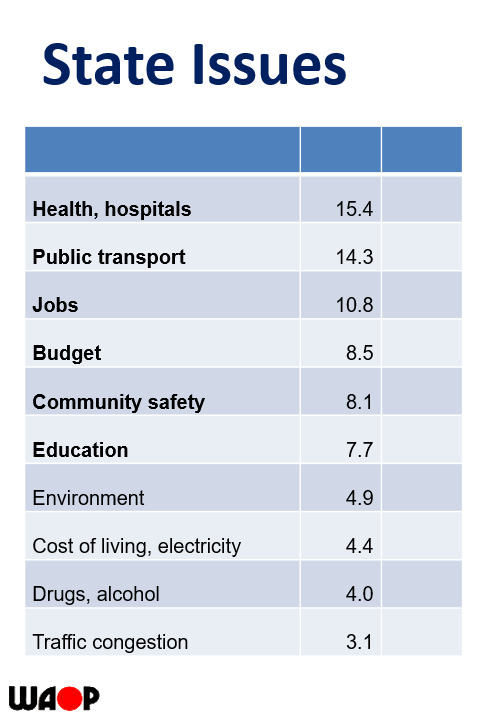