UnionsWA has commented on the release today of new data from the Australian Bureau of Statistics on the gap in pay between women and men and announced that on International Women’s Day, Friday 8 March, a rally of working women and men will be held to protest the lack of progress on equal pay, paid domestic violence leave and the need for improved parenting leave. 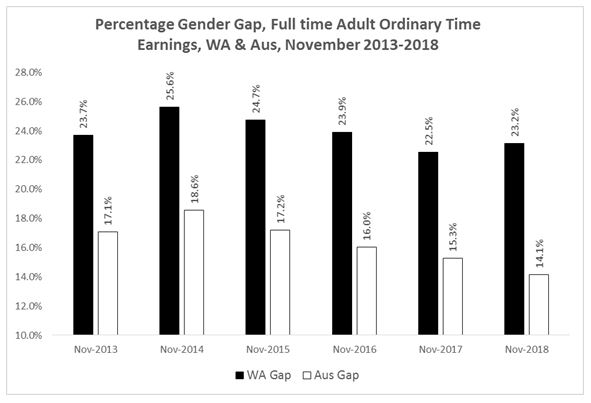 “Western Australia continues to have to worst gender pay gap of any State or Territory in Australia.

“Over the past year, the gap in WA has gotten slightly larger while nationally is has improved slightly.

“Based on full time ordinary earnings, women in WA are paid $443.70 per week less than men on average.

“Further compounding this, is that women often perform the majority of caring - for children, ill or older family members – and these roles are unpaid.

“As women spend time out of the workforce to care for others, they lose weekly income and fall further behind in their superannuation contributions for savings in retirement.

“Unions are backing a call by the ACTU for there to be a higher minimum standard for parental leave of at least six months paid leave and that superannuation payments are also made on that income.

“Paid domestic violence leave needs to be paid, as a minimum standard, this is particularly important as women are much more likely than men to be experience such violence which, in turn, can put employment at risk.

“This continuing injustice towards women is also a result indifference and inactivity by employers and governments.

“Unions in WA have called a rally to be held on International Women’s Day, Friday 8th March, to protest the lack of progress for fair pay for women, paid domestic violence leave and the need for improved parenting leave.

“Working women and men and their families are invited to rally from 5:15 pm at the Supreme Court Gardens.”