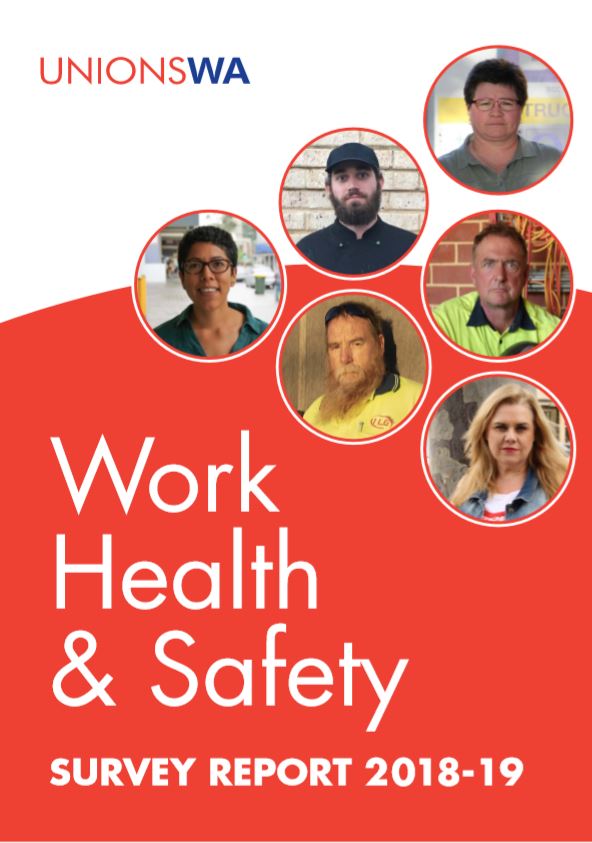 “Current work health and safety laws were framed more than thirty years ago and are woefully out-of-date.

“We can and should save more lives and prevent more injuries.

“In the 1980’s physical risks at work were both more common and more commonly understood to be a major risk for working people.

“Fully 93% of survey respondents nominated workload and management-related stress as either the most important or second most important workplace health and safety issue.

“Workload and stress was the highest ranked issue across the public and private sector workforce and whether or not people are working in Perth or WA’s regions.

“Current work health and safety laws and most regulations are silent on role that work might play in prevention or responding to mental ill health.

“Violence and bullying was ranked as the second highest concern, notably among our public sector workforce in local schools, hospitals and other essential services.

“Of course, many people still work in jobs that present physical hazards to health and wellbeing, which the survey found more often raised by those working in the private sector or regional WA

“While our work health and safety laws have remained unchanged, medical knowledge has advanced.

“We know much more now than we did in the 1980’s about cancer causing toxins and factors such as exposure to UV radiation or dust.

“Manufactured stone for kitchen benchtops, a product virtually unknown until the 1990’s, contains around twice the level of dangerous silica compared with granite, which has been mined for millennia.

“While overall rates of workplace fatalities and injuries have been declining, this rates of work healthy and safety improvement in WA has been slower than elsewhere.

“Until recently, penalties for work health and safety breaches in WA were the weakest in the nation, while we have among the most dangerous mix of industries and occupations.

“Cut backs in government work health and safety measures have also had an impact.

“Between 2007 and 2017 the number of workplace visits by Worksafe WA declined by 38%, while the numbers in employment rose by 22%.

“When the cops are not on the beat, crooks run free.

“Workplace inspections are crucial, in part because insecure work and economic uncertainty means that many fear that they will lose their job if they blow the whistle on unsafe practices.

“Unbelievably, sham contracting arrangements in the so-called gig economy mean that these working people are not protected by current work health and safety laws.