The WA Council of Social Service (WACOSS) and UnionsWA have today released results of an extensive survey that details the extent of the housing crisis in WA and have called on the Federal and WA governments to take urgent action. This Housing, Work and Income Report Part II is available online here. 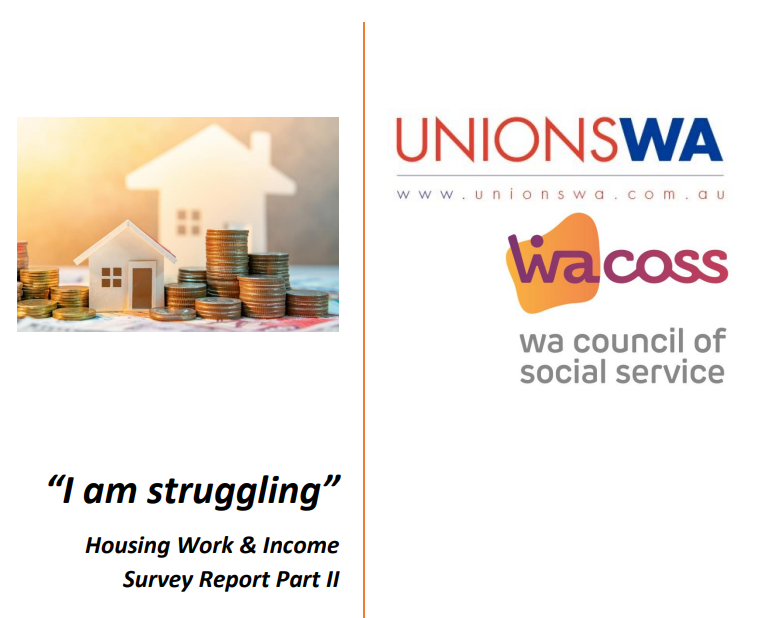 “Our survey shows that those on low or fixed incomes, single people including sole parents, experience the worst levels of housing stress.

“Solutions are also urgently needed for those the private rental sector who experience high levels of housing stress, fuelled by soaring rents and a shortage of social housing options.

“This survey of 938 respondents found the lowest quarter in terms of incomes were in three times as much housing stress as those in the highest quarter income group.

“Those lowest income households were found to expend 44% of their after-tax income on housing compared with only 15% for those in the highest income bracket.

“After a decade of Federal Government neglect on social housing, we badly need a major national building program that starts to remedy this and matches the commitment from the WA State Government.

“The Morrison Government should immediately increase Commonwealth Rent Assistance by 50% and the Federal Budget on Tuesday is the time, now, to take action.

“Improving income payments can be acted upon quickly and would be well targeted to those where the need for support is greatest.”

“We can’t afford for the Morrison Government to be missing in action during this housing crisis.

“While many other reports and studies highlight the need for more and more affordable housing, this study highlights the urgent action and assistance now.

“In addition to raising the rate of Commonwealth Rent Assistance, more low waged working people should be made eligible for this support because wage rises, particularly for those on minimum wages, have been woefully inadequate.

“Those with mortgages were also found in this study to be in housing stress and for them the most effective policy response is to increase wages.

“State and Federal Minimum Wage cases are about to be considered by the relevant industrial commissions - governments can and should recommend significant wage increases.

“These cases will determine wages for the lowest paid and so increases will do much to secure housing for those who are most vulnerable.

“Across the board, wages have not kept pace with rapidly rising costs of living.

“Federal and State Governments can and should increase the wage rises they provide for their own workforce.

“The survey found that in terms of housing stress, single people, including sole parents - often women and young people - are particularly vulnerable to housing stress.

“Security of housing requires job security and many women and young people are stuck in insecure jobs.

“There is an urgent need for federal and state law reforms to make conversion of casual jobs to secure jobs quicker and easier.

“Labour hire operators need to be properly regulated to ensure that the principal of same-job, same-pay is applied.

“Halting and reversing the privatisation of public services is another practical way governments can reduce insecure jobs.”

The Methods Report for this survey, previously released, is available online here.