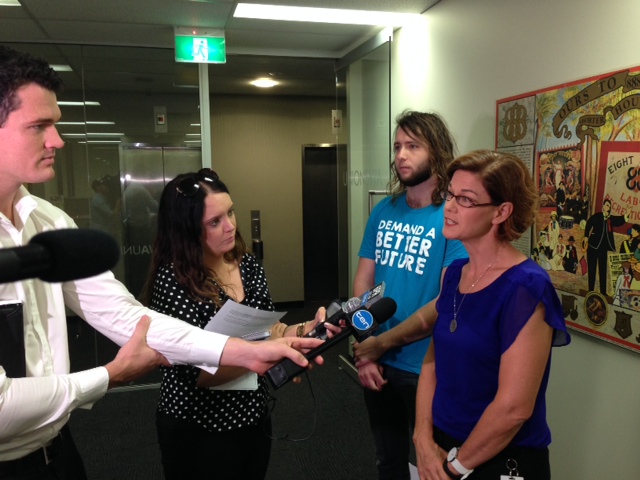 Together with the National Union of Students, UnionsWA has today, the Labour Day holiday in WA, announced details of a rally in Perth as part of a National Day of Action to fight attacks on worker’s rights, living standards, penalty rates and rising costs for health and education under the Abbott Government.

“The Labour Day long weekend - set aside to commemorate the winning of the eight hour working day - is a fitting occasion to put the Abbott Government on notice about proposed cuts to penalty rates, a major theme of the Perth rally to be held on Wednesday.

“The important point isn’t whether Abbott, Bishop or Turnbull hold the job of Liberal party leader, it’s the jobs of Australians - fair pay, time to spend with family, the household spend on essential costs of living - these are the things that determine our living standards.

“The Abbott Government is using the Productivity Commission inquiry into rights at work in an attempt to cut penalty rates, undermine the minimum wage, bring back unfair individual contracts and swing even more power to employers.

“In WA, Premier Barnett is on the record supporting cuts to penalty pay rates while expanding retail working hours.

“West Australians didn’t vote for cuts to Medicare, $100,000 university degrees, slashing the public sector and attacks on pay and conditions.

“The impact on living standards, especially in WA where essential costs of living are high, is real and will be felt for years ahead.

“These issues need to be the focus of all governments, state and federal, instead there is growing frustration that our governments are obsessed by internal party political matters and personal monuments.

“The rally on Wednesday is the first in a series of coordinated activities to focus on living standards.

“Already, 1,000 active union members and supporters across WA have signed on to support this effort.”

The Perth Rally, part of a Nation Day of Action, will be held on Wednesday 4 March from 12:30 at Parliament House. Other rallies will be held in Melbourne, Sydney, Newcastle, Adelaide, Canberra, Brisbane, Gold Coast, Townsville, Mackay, Hobart, Launceston, Darwin and Tennant Creek. RSVP and details for the Perth rally are available here.