On the eve of the Easter Long weekend, UnionsWA has today release new modelling by Australian Council of Trade Unions (ACTU) that shows $30 million would be lost to the Australian economy over Easter public holidays if Prime Minister Turnbull goes ahead and cuts penalty rates. The same research estimates lost income over Easter in WA of $1.5 million.

“The impact over Easter on the WA economy of a loss of $1.5 million is a blow we cannot afford.

“By necessity, low paid working people tend to spend all their income locally.

“For these working people penalty rates need to be protected so they can have fair pay for a decent life.

“While others have time off, those who work on weekends and public holidays forgo time with family or friends or to be involved in their communities or to simply relax.

“Penalty rates is compensation for such lost time.

“The proposed cut in pay is as loss of income that these working people and their families cannot afford and don’t deserve.

“Contrast this with the big end of town with the Turnbull Government promising a $50 billion tax cut.” 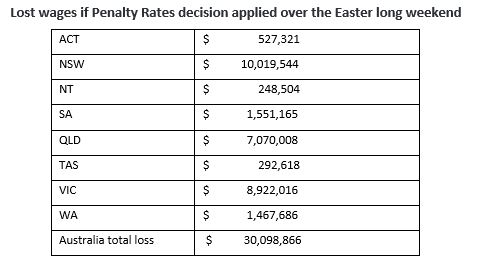 Calculations and assumptions related to these figures can be viewed here.