Audit Report: “a race to the bottom for a rat-race at the bottom” - UnionsWA

Audit Report: “a race to the bottom for a rat-race at the bottom”

Following the May Day march through Fremantle today UnionsWA released new data estimating the impact in WA of proposed cuts to the minimum wage and of relocation of long term unemployed youth.  UnionsWA and the Australian Council of Trade Unions (ACTU) called on the Abbott Government to immediately reject these proposals from the recent Commission of Audit Report.

"The Commission of Audit report is a plan for a race to the bottom for a race-rat at the bottom.

“In today’s terms, the cut to Minimum Wage in WA would mean a loss of $136 per week.

“The cost of living in WA is one of the highest in Australia, and rising faster than elsewhere in the nation.

“Today we have released new data showing that around 20,000 long term unemployed youth would be subject to the forced relocation policy.

"The reality of this proposed policy is that WA has a stronger economy than most of Australia so many from over east will be forced to come to WA to compete for local jobs.

“I worry that forcing long term unemployed youth to move away from family will mean importing social and economic problems into WA.” 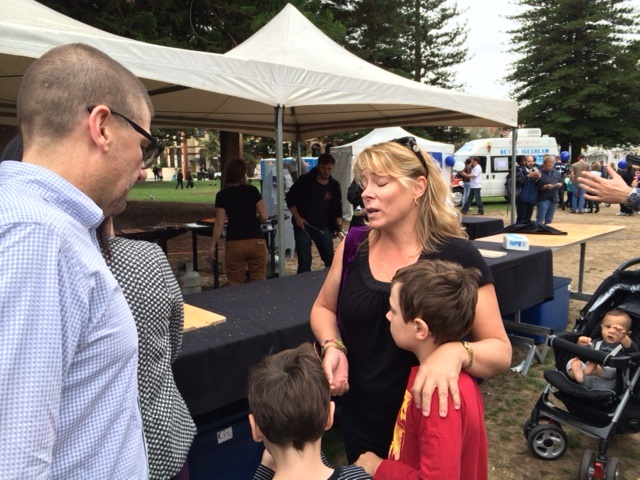 "This is more than an attack on the low paid - it is an attack on all of us." ACTU Assistant Secretary Tim Lyons discussing the proposed minimum wage cut at Perth May Day Fair.

"This is an ambush on Australian workers - the minimum wage has nothing to do with the Federal budget but what this shows is that the Government and Big Business will take any opportunity to drive down the wages of working people," Mr Lyons said.

"The big business strategy is clear, if you bust apart the wages safety net you can drive everyone's wages down.

"Australian unions will defend our wages safety net and the conditions that working people have built up over 100 years."

Source: National Commission of Audit (7.11 Unemployment benefits and the minimum wage), available here. The current national minimum wage is $622.20 per week, calculated on the basis of a week of 38 ordinary hours work. The Average Weekly total earnings for all persons in Australia in May 2013 was $1,105.00.  Applying the National Commission of Audit ‘Minimum Wage Benchmark’ at 44% of Average Weekly Earnings would mean a full time minimum wage of $486.20, or a cut of $136.00 per week.  Therefore the figures apply the Commission of Audit assumptions as if applied today. Note the Commission proposes that in such as WA states where average earning are higher than the national average the lower national earnings average be used.

The Commission of Audit (see link above) have proposed that the forced relocation policy apply to those who have been long term unemployed (LTU) i.e. for 12 months or longer, aged 22 to 30 years and whom have not dependants.  An unspecified ‘special circumstances’ exemption would apply which cannot be factored into these estimates.  The Australian Bureau of Statistics 6291.0.55.001 - Labour Force, Australia, Detailed - Electronic Delivery, March 2014, UM3 - Unemployed persons by State and Territory, Age, Sex and Duration of job search, from here estimate that there were 55,200 12 month plus unemployed people in Australia and 5,900 in WA aged between 20 and 34 years.  To estimate the proportion in the age range 22 to 30 years these figures were reduced by 60%.  To omit those who have dependents (estimated by the Commission of Audit, quote: “More than half of Newstart Allowance recipients are single and have no dependents” and so 60% of the LTU cohort i.e. Nationally: 55,200 X 0.6 X 0.6 = 19,872 and, for WA: 5,900 X 0.6 X 0.6 = 2,124.

This media release can be downloaded from here.